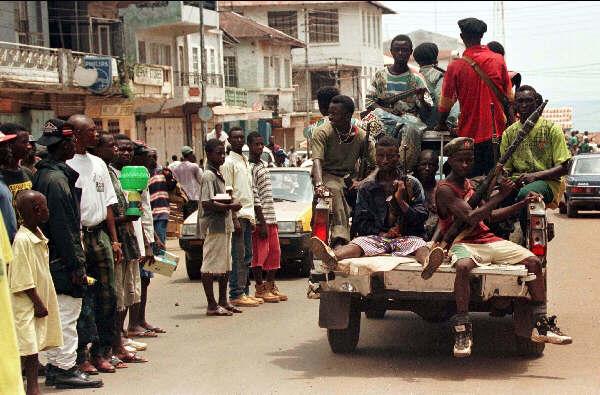 In May 1997, a month before WSPA was due to visit the sanctuary, a coup occurred in Sierra Leone. The rebel forces had seized power of the capital Freetown and were running a campaign of terror and looting causing the President to flee. The Nigerian led West African Intervention Force, ECOMOG, was brought in to oust the rebels from Freetown and reinstate the President.
Heavy fighting ensued and eventually Bala was forced to take refuge with other civilians in a hotel under the protection of ECOMOG soldiers. The hotel came under attack for two days when finally the Red Cross successfully negotiated a 1-hour cease-fire allowing the civilians to be evacuated.
Bala travelled to London, where he approached several animal welfare organisations to request emergency assistance for the sanctuary. As the rebellion continued, all the sanctuary’s money was frozen in a closed bank in Freetown. However, food and medicine for the chimpanzees still had to be purchased every day. Bala managed to channel funds to Freetown through any means he could to keep the Sanctuary afloat. WSPA and other organisations offered financial assistance which Bala took back to Sierra Leone as soon as he was allowed.
In the midst of the war and against all advice, Bala decided to travel back to Sierra Leone. After five days of travel he reached the sanctuary in November 1997, and was relieved to see that the staff and chimpanzees had survived.
Rebels had twice passed through the sanctuary, each time looting all chimpanzee food, medicine and the staff’s personal belongings. The staff had risked their lives to creep around the forest and find enough food to keep the chimpanzees alive. They had little money and often had to take loans from the local people, while awaiting financial aid from Bala. The local community was very generous and thoughtful, a feat made even greater by the fact that they were suffering from terror and insufficient food themselves. This has created a permanent bond between Tacugama and the local community.
Sadly, due to stress of the shooting, the bombing and the unavailability of medical supplies five chimpanzees died during these tragic months. The remaining chimpanzees lost weight and were traumatised by the events of the war. When the coup ended, all but one of the chimpanzees reverted to their old characters. Little Boy was deeply traumatised and mentally scarred. He started pulling his hair out, rocking back and forth and carried a comfort blanket with him everywhere. This behaviour was aggravated by seizures that sadly led to his death a few months later.
However, just the survival of the sanctuary alone, including almost all chimpanzees and staff, against all odds is phenomenal in and of itself, and a testament to the character of everyone here at Tacugama.