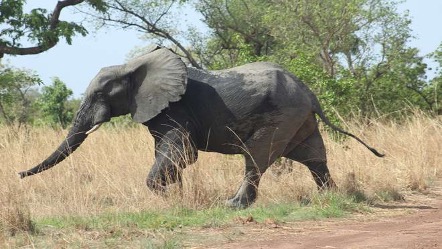 Elephant species are just magnificent and breathtaking. They are as huge as a whale and most times as gentle as dove. It is really a beautiful experience for those who are fortune to have seen such a beautiful animal. There are two sub-species of elephants in Africa i.e. the West African Elephant and the African Savannah Elephants. These species of African Elephants can be traced to 13 countries in Africa. They inhabit the dense rainforests of West and Central Africa.  According to World Wildlife Fund (WWF), African Savanna elephants are larger than African forest elephants, and their tusks are curved outwards, and West African Elephants are darker and their tusks are straighter and pointed downwards. WWF also stated that both African Elephant species are threatened by habitat loss and habitat fragmentation due to conversion of forests for agriculture, livestock farming, and human infrastructure. According to Conservation International (CI), Surveys suggest that there are only about four hundred and fifteen thousand (415,000) African Elephants left in the wild, compared to over one million (1,000,000) a generation ago.

Apart from being one of the beautiful jewels of mankind, elephants make life better and a lot easier for humanity. There are four main benefits mankind derive from the elephant species. Firstly, they help plant trees and fight climate change. These are animals that eat different kinds of wild fruits and cover a vast area of land therefore; they play a key role in spreading seeds far and wide. Scientists have discovered that there is lower tree diversity in forests that no longer have elephants. Keeping forests healthy ensures trees will continue to store carbon in their trunks, roots and soils, which in turn helps reduce the effects of climate change. Elephants also support other species. They are believed to be “ecosystem engineers”. They push over trees to maintain savanna ecosystems, excavate waterholes and fertilize land, which helps other animals thrive. Elephants are found in a wide variety of ecosystems, so to protect their habitats means to protect many other species as well. Also, elephants attract tourists which can greatly boost the economy of a country and surrounding communities. Lastly, elephants increase security because its presence in a particular area means the presence of conservationists and wildlife protection organizations thereby, creating a form of security for people living in that particular area (Conservation International).

Did you know that the West African Elephant also known as Loxodonta Africana has been spotted in Sierra Leone? Yes, it’s true.  We do have elephants in Sierra Leone. The first footage that I saw of West African Elephants was on one of our camera trap videos from the Outamba Kilimi National Park, in Tambaka Chiefdom, Karene District in the Northern Region of Sierra Leone. In late August 2022, another elephant was seen in Kailahun District near the Liberian Border. Footage of this beautiful animal went viral on social media. It was really a beautiful feeling seeing how happy the people were because I am sure it was a first time experience for most of them. “This is an important occurrence for Sierra Leone’s wildlife and conservation world”, I said to myself. Unfortunately, just a few days later I saw a video of the elephant in a bad state. I am yet to know what really happened to the animal. I must confess that it is a very bad precedent that we are setting for future generations. Such animals should be preserved safe from harm or danger. According to my research, these animals live in groups, so it is possible that it might have been separated from its group. Having West African Elephants can be a huge boost to wildlife and ecotourism since our country’s tourism sector is pushing more towards engaging in ecofriendly activities. Such can only be achieved when visitors can see protected forests, landscapes, various species of animals and birds thriving in their natural setting. Just think about the number of people who would come to Sierra Leone to behold such a sight. This would not only add more value to the tourism sector, but also create more job opportunities for people.

If it is indeed true that the said elephant is dead, then there should be some form of investigation to know what went wrong. Laws regulating wildlife in Sierra Leone should be strengthened to prevent such situations and preserve our remaining wildlife. How can we ever expand the tourism sector if we continue to kill and destroy our wildlife? We should change our perception towards wildlife. It is our collective responsibility to ensure that we safeguard and protect the remaining wildlife we have in the country. It will be very disappointing for us to allow our wildlife and rich biodiversity to slip through our fingers because we failed to take actions at the appropriate time. We should always protect wildlife especially iconic species like our National Animal, the Chimpanzee (Babu) and elephants. The time to act is now!!!